According to new research from Interact Analysis the demand for lithium-ion batteries is expected to rise to over 1.6TWh by 2026, up from 476GWh in 2021. Massive growth in both the battery and battery manufacturing equipment markets is driven largely by the electric vehicle boom.

In 2021, the EV market accounted for 354.5GWh of Lithium-Ion battery shipments, making up 74% of the total shipments that year. By 2026 the EV market will account for 1,237.4GWh, 76% of total battery shipments – a CAGR of 28%. Out to 2026, APAC will continue to dominate the battery market, and will still account for 74% of global shipments by 2026. Despite this, the Americas will see the highest growth rates for batteries, with a CAGR of 30% over the next five years.

In terms of sales, China accounted for 54% of volume in 2021 (the second largest sales market was North America: 12% in 2021). EMEA regions are likely to see strong growth on the demand side from the EV and energy storage sectors and will account for a total sales market share of 12% by 2026. 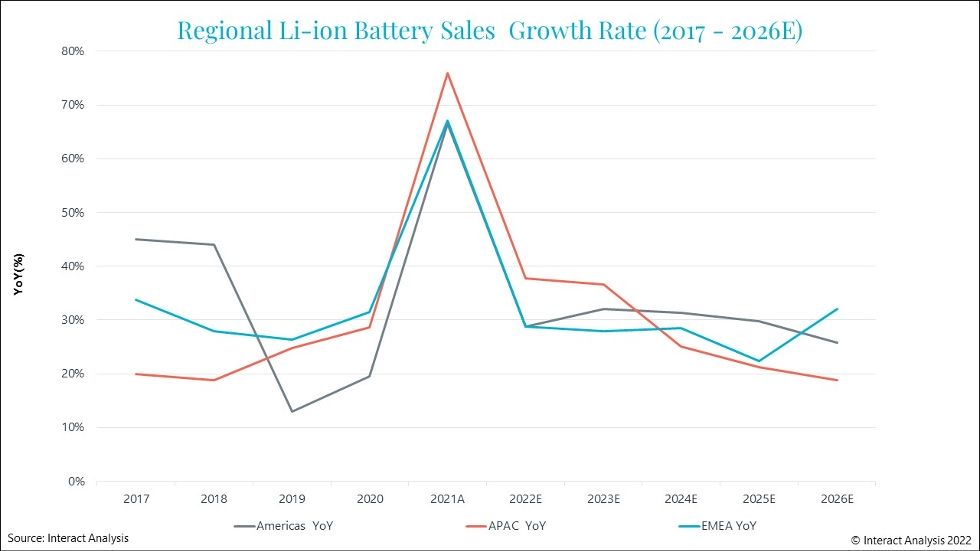 The global capacity utilization rate of Lithium-Ion batteries reached its lowest point in 2020 because of the pandemic, dragged down by industrial shutdowns. It is likely to remain low in many industries yet, in spite of this, the production capacity for Lithium-Ion batteries surpassed 1TWh for the first time in 2021, a production rate that is set to increase with a CAGR of 23% to hit to 3.6TWh by 2026.

As a result of increased investment in Europe and America, the global Lithium-Ion battery equipment market exceeded $7bn in 2021. It is expected to triple by 2025. The Americas will enjoy the largest CAGR of 37% followed by EMEA and APAC at 53% and 27% respectively. 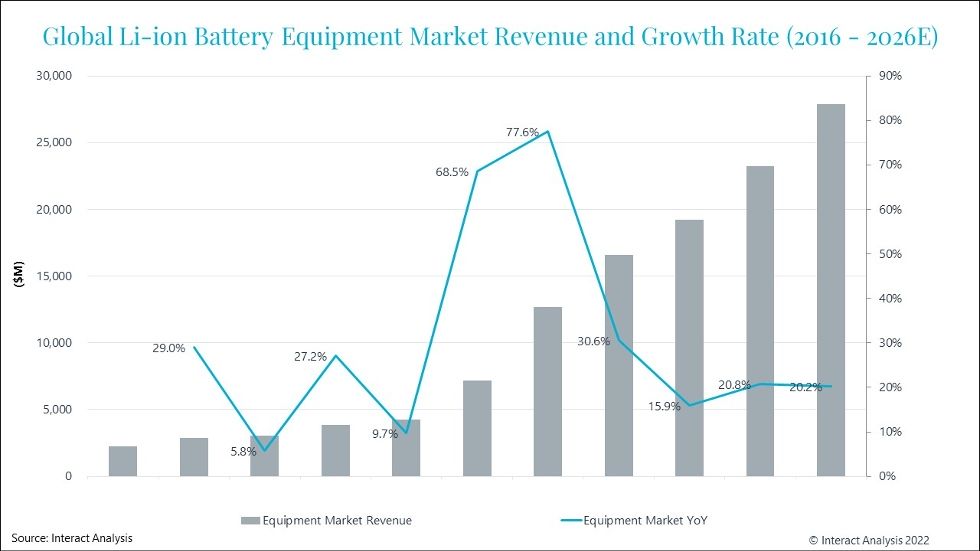 Maya Xiao, Senior Analyst at Interact Analysis says, “On the battery manufacturing side, one key point of interest is that many OEMs are beginning to work with battery manufacturers to determine battery configuration, this is an initiative that is in its infancy, but we are likely to see more of it throughout the forecast period.

On the equipment side, the market is being driven by demand for high-end equipment. In particular, this demand comes from Japanese and Korean equipment manufacturers, who have far greater precision, automation and stability requirements, since they began production much earlier than Chinese vendors.”

Using both primary and secondary research, the report includes a detailed database of battery suppliers and existing and planned manufacturing plants around the world. Our analysis of the battery supply side and the current and likely future demand from end users helped us identify imbalances and assisted us in modelling forecasts for demand for battery manufacturing equipment.

Containing the high-level Lithium-Ion battery production and supply numbers and a highly detailed database with an in-depth analysis of lithium-ion battery manufacturing equipment.