In December, the EU commercial vehicle market contracted again, marking the sixth consecutive month of decline. Demand fell by 8.4% to 155,963 units, mainly due to a drop in new van sales. In fact, registrations of trucks and buses actually improved compared to December 2020. The region’s four major markets all posted drops, with the sharpest seen in Spain (-31.9%).

Overall in 2021, commercial vehicle registrations in the European Union increased by 9.6% to reach 1,880,682 units, largely thanks to the low base recorded during the first half of 2020. Nevertheless, this full-year result remains far below the 2.1 million units registered in 2019, the year before the pandemic. With the exception of Spain (-2.8%), all major EU markets posted growth last year. Italy saw the highest percentage gain (+15.5%) followed by France (+7.8%), while registrations increased by only a modest 0.6% in Germany.

During the month of December, registrations of new vans across the EU declined significantly (-12.8%) again. The main reason still being the microchip shortage that has hit production of this vehicle category in particular. This trend was reflected in the performance of the region’s four key markets, all posting strong declines in the last month of the year: Spain (-34.8%), Germany (-12.4%), France (-10.5%) and Italy (-9.2%).

Looking at full-year 2021 volumes, nearly 1.6 million light commercial vehicles were registered across the EU, a year-on-year rise of 8.5%, despite negative results in the last six months of the year. However, performances were mixed in the four big markets. In Spain (-4.0%) and Germany (-0.8%) new van registrations fell slightly, while Italy and France ended the year positively, with volumes up by 14.7% and 7.5% respectively.

NEW HEAVY COMMERCIAL VEHICLES (HCV) OF 16T AND OVER[3]

Last year, new truck registrations across EU expanded by 16.8% to reach 289,316 units sold in total. Despite negative results from September to November, gains recorded during the first half of the year and in December helped the full-year performance. As a result, nearly all EU markets managed to perform better than in 2020, including the four major ones: Italy (+22.3%), Spain (+8.1%), Germany (+5.6%) and France (+5.5%). 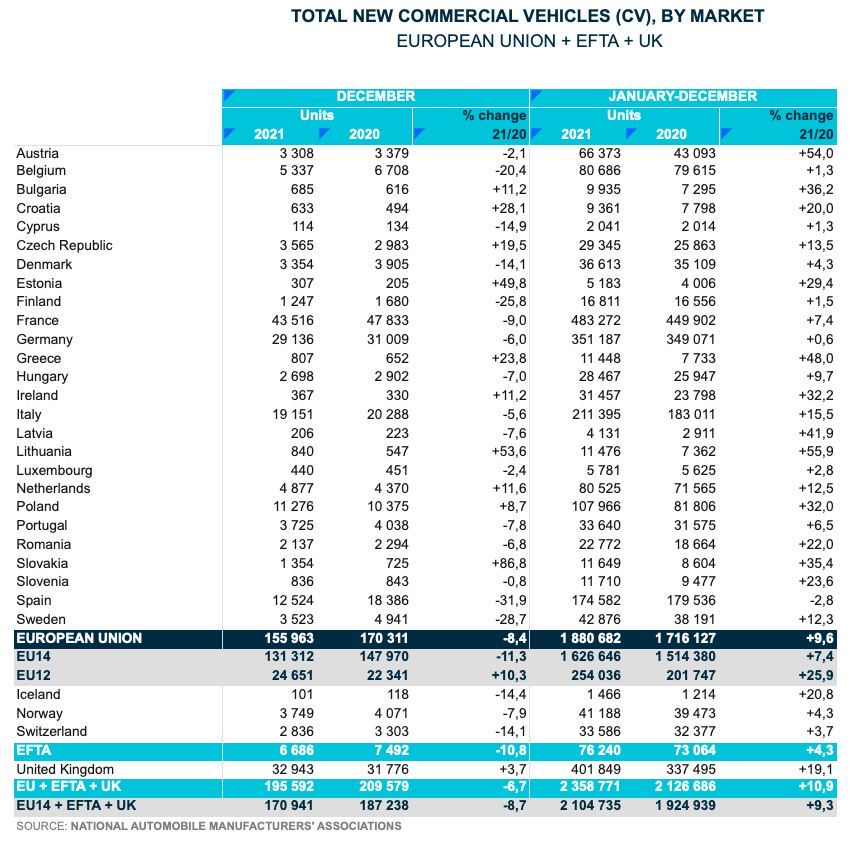