Tree Energy Solutions (TES) is initiating the acceleration of its announced plans to develop the German port of Wilhelmshaven into a world-scale hub for importing Green Gas. The fast-tracking will provide for alternative energy security for Germany and Europe whilst accelerating the growth of Green Gas imports over time. With Green Hydrogen at its core, the Wilhelmshaven green gas terminal is sustainable, carbon-neutral, and transitional, meeting the German’s government short term and long-term energy requirements.

TES’ Wilhelmshaven project, initiated in 2019, is set to play an even more significant role in delivering energy to Germany and contributing to Europe’s energy strategy in a sustainable way while stimulating material economic growth for the regional economy.

TES confirms that an acceleration of its project will be fully consistent with and supportive of the strategic priorities of sustainability and diversification of energy supply, by accommodating the handling of gas imports alongside imports of green gas in the early stages. TES expects that this could even accelerate the possibilities to achieve Germany’s sustainability goals but also prevent future stranded assets.

“We are now planning further work to ensure an operational start of phase 1 by winter 2025 at scale. In view of our planned full scale (we are planning 6 independent tanks combined with 6 ship-berths using a novel approach with minimal environmental and visual impact), we are also willing to constructively accommodate any alternative gas importers and still ensure Third Party access in line with current DG Energy regulations and practices. TES welcomes participation from other parties on the condition that it accelerates the project and does not jeopardize the long-term clean and green energy ambitions that are core to the TES DNA. TES also believes that managing the current crisis should be done in such a way that long-term climate targets will and do not need to be compromised. The TES-Wilhelmshaven project is a unique project that can exactly do this”. said Paul van Poecke, Founder and Managing Director at TES.

Security of energy supply for Europe

Paul van Poecke continues: “The TES-Wilhelmshaven project is unique in its ability to achieve Germany’s and Europe’s plans to decarbonise in a sustainable way at an industrial scale whilst carefully and prudently navigating the current energy-crisis. We want to boldly drive forward energy transition with the aim of making Germany’s energy supply CO2-neutral. This will be achieved by developing Wilhelmshaven as a green energy hub. The latest developments do not interfere with the energy targets to be met by 2045. Already Bundeskanzler Scholz mentioned how Germany sees to support the development of an import terminal in Wilhelmshaven with hydrogen potential. TES believes that its fully sustainable Wilhelmshaven-project deserves at least the same if not stronger support compared to alternative traditional LNG-terminal initiatives considering the concurrent climate-crisis”.

An initiative to accelerate decarbonization

“The primary objective of the European Union’s decarbonisation policy is to achieve the fastest possible reduction of CO2 emissions at the lowest possible cost,” Otto Waterlander, Chief Commercial Officer at TES, said. “The current rapid growth of renewable energy must continue. But it will be impossible to replace all molecules with electrons. With only 28% of the EU’s Primary Energy Consumption of 17,407 TWh coming from electrons, we must focus on the other 78% to achieve our net-zero ambitions. Green hydrogen imported by TES will significantly accelerate the energy transition in Germany and help the mobility, industry and power sectors achieve their decarbonization targets and solve the energy storage problem. It will make an immediate impact on CO2 emissions and eliminate customers’ exposure to significant CO2 costs. Our Wilhelmshaven project will account for 10% of the total annual primary energy demand of Germany by 2045, approximately the annual energy consumption of 43 million households in the country.”

TES Green hydrogen will be primarily produced using solar, wind and hydro power in countries with abundant renewable energy sources, after which CO2 will be added to make green CH4 which will be used as the ‘energy carrier’. This will then be transported to Wilhelmshaven utilizing a specially constructed fleet of ships. At Wilhelmshaven, the green CH4 can be converted back into green hydrogen, with the resulting CO2 being captured and returned to the producing countries by ship in a continuous closed-loop system, this way we guarantee that the CO2 never leaves the cycle and we avoid GHG emissions.

In the initial phase of 25 TWh per year of green gas import, more than half a million tonnes of hydrogen can be produced and imported in Wilhelmshaven. This will rise to 250 TWh per year and more than 5 million tonnes of hydrogen in a final stage. This corresponds to one tenth of the total annual primary energy demand of Germany. The energy output of the project means that an essential milestone of the German and European hydrogen and climate protection strategy will be achieved. 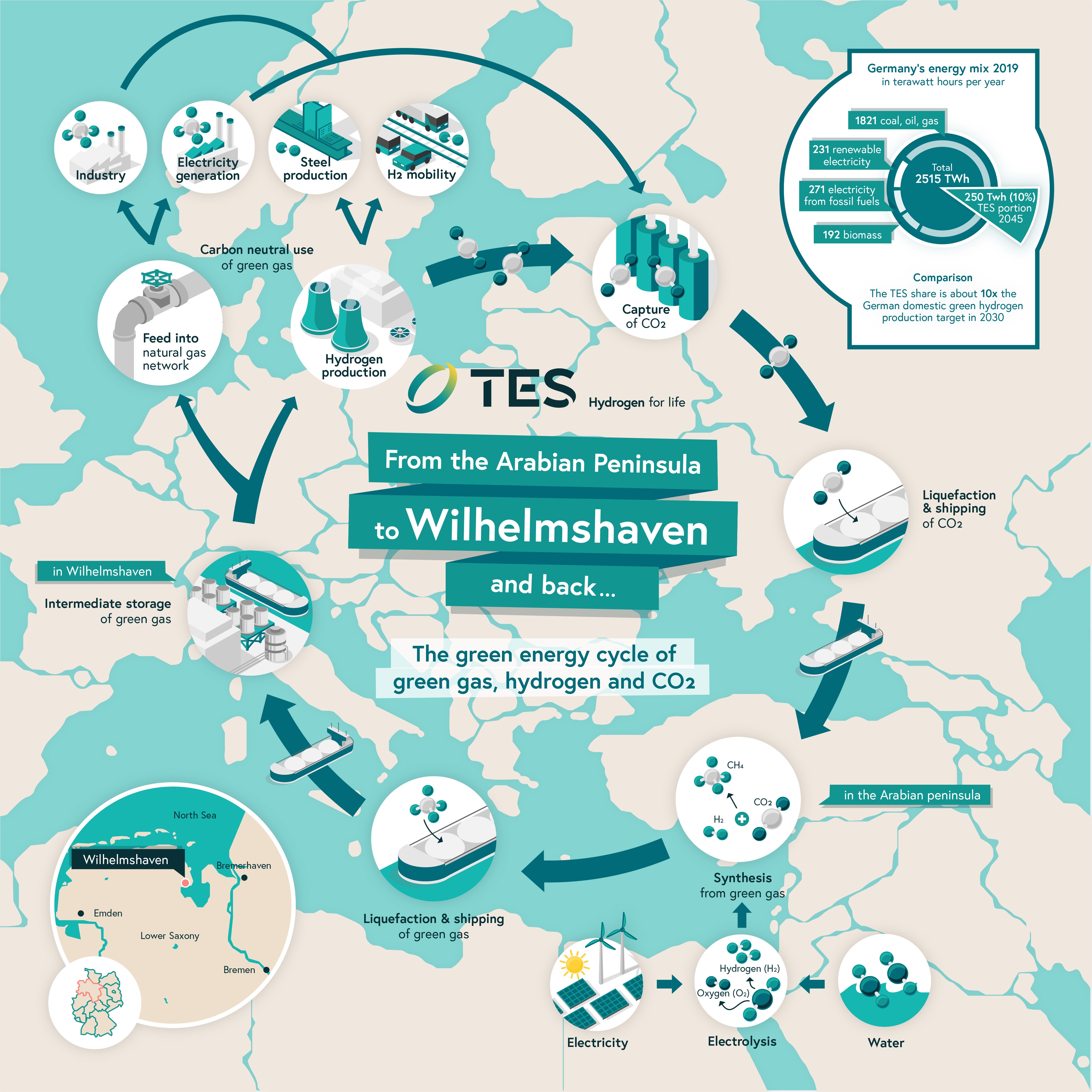